Have Questions about NiSCA Card Printer Supplies? We Have Answers!

How Do I Know Which Supplies to Use in My NiSCA ID Card Printer?

There are two ways to find genuine NiSCA ribbons and supplies for your specific NiSCA printer model.

If you have any difficulty finding your NiSCA printer supplies, give an ID Professional a call!

Do I Really Need a Cleaning Kit? 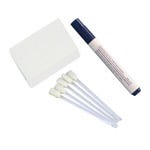 Dust may be small, but it can cause so much damage to your NiSVA card printer. Small particles of dust and debris can accumulate inside a printer and cause spots or specks to appear on the printed cards. Worse yet, it can damage the printhead which can cost hundreds of dollars to replace.

So, yes, a cleaning kit is very important! NiSCA recommends that you clean your printer after each ribbon change. With this, you'll extend the life of your printer, keep your card printing costs down, and protect your printer warranty.

An added bonus, NiSVA printer cleaning kits are inexpensive! Most are just a couple dollars a cleaning.

All NiSCA card printerscome with up to a 3-year manufacturer warranty that covers parts and labor. With TrueSupport, you'll receive comprehensive customer service and technical support that includes printer loaner coverage during the manufacturer warranty period, phone-based technical support with remote assistance, an annual one-hour training session, a compatible printer cleaning kit, and an annual printer check-up conducted remotely. Our premium-level TrueSupport plans are the next tier of photo ID badge equipment protection available to complement our customer-centric Cares Support program already available to all customers. TrueSupport is a three-year coverage plan, with four- and five-year extensions available. For more information or to sign up, call us at (800) 321-4405, ext. 2 or chat live now.