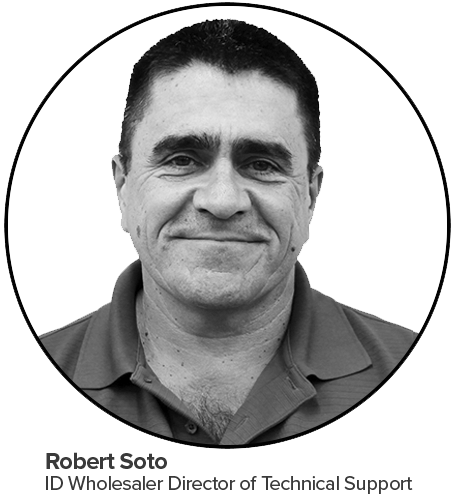 It's safe to say that ID card printer technology has come a very long way over the past several decades.

Today’s ID card printers have a significantly smaller footprint and offer many more security features than their predecessors. In addition, the price of ID card printers is now more affordable than ever.

Over the course of 30 years with ID Wholesaler, Technical Support Director and resident photo ID maven Robert Soto has seen ID badge printers evolve considerably. "Within the past five years alone, ID card printer technology has dramatically increased at a much faster rate," Soto observed. The Director of Tech Support adds that this is a direct result of  manufacturer's improving overall printer appearance, performance, and dimensions.

It really does matter, especially when it comes to card printers.

According to Soto, the latest ID card printer models are about one-quarter the size of the printers he worked with 30 years ago. "Customers just don’t have the space for large ID card printers of that size anymore,” Soto commented. "Today's card issuance programs demand a more compact and modular card printer."

The following developments have helped reinforce the need for smaller printers:

The first ID card printers that were created didn’t produce edge-to-edge coverage, and this left all printed cards with a white border. "Back in the day, there was no smart technology - only magnetic stripe encoding," Soto commented. "Printer speed was half of what it is today."

Soto explained that the biggest change are features from only the most expensive printers can now be found on many more standard ID card printer models.

Inexpensive printers like the IDP SOLID-310SE can print 125 - 150 cards per hour. Newer models such as the Zebra ZC350 LT printer are available with metallic ribbons that can be used to print on darker ID cards and embed color-transforming graphics. This makes cards very difficult to duplicate or modify.

Soto is a strong supporter of laminating ID cards. "The best thing about lamination is that you can’t peel the laminate layer off anymore like the early version of this technology," Soto noted. "This makes ID cards very difficult to counterfeit."

For even stronger security, custom lamination allows for a unique image like a company logo to be used. As an example, Fargo card printer models like the HDP5600XE make it extremely simple and easy to upgrade to single- and dual-sided lamination.

With these enhancements, a new printer can pay for itself more quickly with a lower cost per card while reducing the risk of cards being copied or altered. To learn more, visit our money-saving trade-in promotions >>

For more information about the printers featured in this article, call a friendly and knowledgeable ID Professional today at (800) 321-4405.