With over just under 2,000 students and grades ranging from Pre-K 3 through 12th grade, Beekmantown Central School District welcomes students from in and around the New York State towns of Beekmantown, Altona, Chazy and Plattsburgh. Although this northeastern school district is nestled in an area of rural and small-town living, its ID card program is anything but small town.

Previously, the school employees used a feature-limited software to print the district’s ID cards. The software had just a single license which limited its use to one computer and location at a time, forcing only one user to manage the entire program for the district.

But Beekmantown was poised with a strategic goal in mind. Since their district includes four schools with two physical campuses, a more agile ID card program was integral to ensuring the success of the new badging program they were about to start. The new program needed to include advanced technology and versatility so they could consolidate their ID card production and optimize their security profile.

Beekmantown relies heavily on security credentials for the entire district: staff and student photo ID cards with an access control function, cards to identify school volunteers and vendors, lunch cards for the elementary students and separate cards designed to manage school-assigned Chromebook were all part of the mix. Adding a level of complexity was that each campus had a need for the ability to access and print cards independently of the other campus. 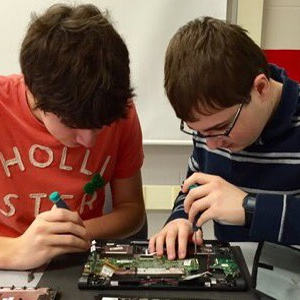 Over a year ago, the Beekmantown Central School District’s Director of 21st Century Learning, Gary Lambert began his search for a cloud-based ID software program. The school wanted to move their ID card program to a cloud-based platform for greater efficiencies, data management and growth scalability.

The software they ultimately chose would need to calibrate with the requirements of increasing the school’s security while helping better manage the ID cards for students, staff, volunteers, vendors and other visitors. In addition to providing photo ID for students and staff, programs would also benefit greatly from CloudBadging – like their 1:1 Digital Literacy Initiative program, school lunches, secure access to the district’s entrances and more.

With their high school graduation rate hovering at 93%, the Beekmantown Central School District far surpassed the National Center for Education Statistics of an 83% graduation rate. Part of the reason for their success with students is a desire on the part of the district to acquire the best tools possible to meet staff and student needs. To keep the momentum at a positive cadence with such a shining success rate, it was critical that the new student card program was easy to implement so they could begin using the application right away. 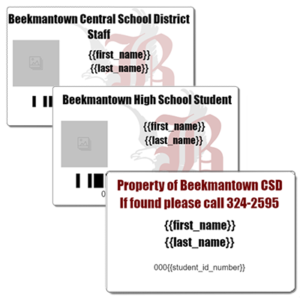 One of the primary requirements that Lambert and his team wanted was a SaaS (Software as a Service) solution for their new card program. After researching his options, Lambert reached out to ID Wholesaler and spoke with Account Manager Eric Heithecker.

After listening to Lambert’s software requirements, Heithecker knew he had a solution for the district: CloudBadging ID Badge Management Software. Best of all, this web-based software included a free 30-day subscription period so the district could get some real-world, hands-on experience before purchasing it – which they did!

SOLUTION:  Implement the Industry Leader in Cloud-based ID Software
After the CloudBadging purchase, the project was handed over to one of Beekmantown CSD’s Help Desk Technicians, Garrett Burgess. He contacted ID Wholesaler’s Customer Success Team to help with the software’s implementation. It allowed him to test and validate a seamless migration of existing ID card data over to the new application, as well as print out a number of c 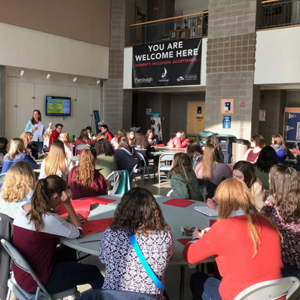 ards to find out just how well the software worked.

Needless to say, Garrett was extremely pleased with how fundamentally easy it was to move onto a completely new platform like CloudBadging. “There was very little downtime, and the data migration went more smoothly than I had anticipated,” Burgess commented. “I also enjoyed how simplified creating unique card design templates for the different types of groups we were providing identification for.” But what Burgess really appreciated was CloudBadging’s ability to assign multiple users with various access permissions so they could log into their account on any web-enabled device.

“CloudBadging has made a real difference in our ID card program here at Beekmantown CSD,” Burgess stated. “We were able to consolidate multiple user logins and multiple software licenses into a single ID software application.” Burgess also appreciates the flexibility each school has in managing their students’ badges.

“I’m also glad I reached out the CloudBadging Tech Support Team,” Burgess recalled. “They were extremely helpful with helping us migrate the data from one platform to another, teaching us how to accommodate the new grade levels once the new school year rolls around and the orchestration of how to make it all come together.”

RESULTS:  Depend on the Experts


Beekmantown continues to use CloudBadging Software, and their program is successfully moving forward. Asked if he would recommend CloudBadging, Lambert immediately commented, “Do yourself a favor and demo CloudBadging; you will find that it will meet your needs at a cost that makes sense for your school district!

When asked what he liked most about CloudBadging, Burgess explained how incredibly easy it was to ramp up and start using the application so quickly. “I also really appreciate the help from the Customer Success Team…they were exceptional!”