Have questions about laminating card printers? We have answers!

What supplies will I need for my laminating printer?

There are two special supply items that laminating card printers require: laminate and composite PVC-PET cards. In order for your printer to add a protective layer of lamination to your cards during the printing process, you'll need to keep it loaded with a roll of laminate, also referred to as lamination or overlamination. There are a number of laminate options, from clear to holographic, patch to full-coverage overlay. Talk with your account manager at ID Wholesaler to determine which option is the best fit for you.

Rather than standard 100% PVC cards, you'll want to choose composite PVC-PET cards for your laminating printer. Composite PVC-PET cards are the same size and look the same as standard PVC cards, but are more durable. More importantly, they are more resistant to the high heat used in the lamination process. Standard PVC cards will warp from the intense heat when laminating, composite cards will not.

Why Would I Need to Laminate My Plastic Cards?

What lamination options are available with a laminating printer?

One of the benefits of a laminating printer is the versatility it has to offer! There are a number of laminate options that your laminating card printer can use interchangeably.

Laminates are also available specifically for use with magnetic stripe cards and smart chip cards.

Should I consider dual-sided lamination?

Lamination extends the life of your card and protects from fading and dye migration. Many laminating ID card printer models are available with the choice of single-sided or dual-sided lamination. Dual-sided lamination provides added flexibility to further protect both sides of your cards. If you are using a holographic laminate, it also allows you to add holograms to both sides of the card.

Choose dual-sided lamination if you want to protect both sides of your cards or if you want to add holographic images to both card surfaces.
I need to store or access data on my cards. What are my card encoding options? 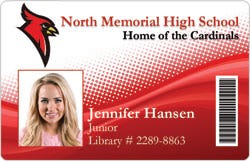 There are three primary ways to store data and access data on a plastic ID card: a barcode, magnetic stripe, or smart card. Of the three methods, barcodes are the least expensive way to "store and access" data on a card and require the least amount of equipment. Barcodes are also the least secure.

A barcode does not require software or a laminating ID card printer with encoding capabilities. This is because the data is not stored within the barcode, but rather electronically in a computer. You will need to make sure that your printer ribbon has a black resin panel to create crisp, easy-to-scan barcodes.

Requirements: All laminating card printers are capable of adding a 1-D or 2-D barcode to a plastic card. You will simply need a barcode scanner connected to a computer that contains the barcode's data to read the barcode. 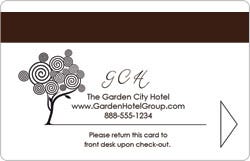 High Coercivity (HiCo) magnetic stripe cards are harder to erase, and are used in applications where cards are frequently used or need to have a long life. High co stripes are resistant to damage from most magnets or magnetic fields and therefore are most often used for access control, time and attendance, and gift cards.

Low Coercivity (LoCo) magnetic stripe cards require a lower amount of energy to record and are easier to erase. Low co stripes can be damaged by even a brief contact with a magnetic field. With this, LoCo cards are typically used for applications where the card is only used for a short time, such as hotel room keys.

Requirements: In order to use magnetic stripe cards, you will need a laminating ID card printer with magnetic stripe encoding capabilities and mid-level or fully-featured ID software. 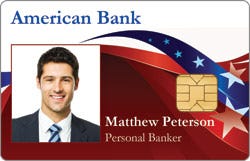 Similar to a magnetic stripe card, data is stored within the smart card components. It can be reconfigured to add, erase, or edit hosted data. A smart card offers added functionality and can hold up to 100 times more data than a magnetic stripe. There are two types of smart cards:

A contactless smart card has a chip and an antenna. In order to be read, it needs to come within a specified distance to the reader (varies by reader), but doesn't need to make direct contact.

*Some cards, such as iClass cards, include non-editable, pre-programmed proximity data and a smart chip for encoding your own data.